Pastor Cherie will live stream on Facebook – Worship Service 11 am 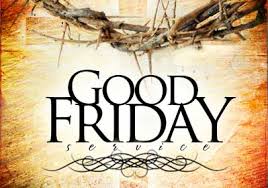 See Pastor Cherie live stream on Facebook worship service at 11 am Sharing Church, Being Church, Together  – will be posted to website shortly afterwards.

The following is the format for the originally scheduled Good Friday Service.

Today is one of the grey areas of the Christian year:

a day when the lights are dimmed

and the sky feels overcast even if it isn’t:

a day when theologians and poets

feel as if a heavy veil is drawn over heart and mind.

We resist the grey areas,

prefer to see everything in black and white,

try not to read between the lines;

throw in a bright colour or two

to try and enliven the scene.

In the grey light of early morning –

after a night in the ecclesiastical high court,

and denial by one of his own circle –

Jesus found himself at the gates

of the reluctant Pilate, who promptly

tried to hand him back to the Jews.

And though the sun rose that morning,

the whole world turned grey for One

who found himself without friend or helper,

would be turned away from him,

knowing that life was about to be drained out of him.

We are invited to accompany Jesus through this grey day:

to be witnesses to his suffering,

to keep silence before his cry of dereliction.

In our imaginations, let us trudge through Jerusalem,

until we come to the place of the Cross:

and then, let us not turn our faces away.

In this grey day lie all the sorrows and failings

of a humanity that strives for high success,

yet comes up against human limitations,

and falls to the ground in despair.

A humanity whose peace plans

give way to guns, and whose political promises

Here is a day marked by the brokenness of the world.

But it is not a day to wallow in misery,

or to indulge in morbid thoughts about the crucifixion.

It is simply a somber, dignified day

when we remember how it was for Jesus,

and find at the foot of the cross

a place to lay down ours and the world’s sorrow.

On grey days it is hard to see clearly,

to the sacred story as it is retold, and

to the inexplicable, mysterious, wondrous

transaction that was, and still is taking place.

Then Pilate took Jesus and scourged him.
And the soldiers plaited a crown of thorns, and put it on his head,
and arrayed him in a purple robe;
they came up to him, saying, “Hail, King of the Jews!”
and struck him with their hands.
Pilate went out again, and said to them,
“See, I am bringing him out to you,
that you may know that I find no crime in him.”
So Jesus came out, wearing the crown of thorns and the purple robe.
Pilate said to them, “Behold the man!”
When the chief priests and the officers saw him,
they cried out, “Crucify him, crucify him!”
Pilate said to them,
“Take him yourselves and crucify him, for I find no crime in him.”
The religious authorities answered him,
“We have a law, and by that law he ought to die,
because he has made himself the Son of God.”
When Pilate heard these words, he was the more afraid;
he entered the headquarters again and said to Jesus,
“Where are you from?”
But Jesus gave no answer.
Pilate therefore said to him, “You will not speak to me?
Do you not know that I have power to release you,
and power to crucify you?”
Jesus answered him,
“You would have no power over me
unless it had been given you from above;
therefore he who delivered me to you has the greater sin.”

Jesus is sentenced to death

Upon this Pilate sought to release him,
but the religious authorities cried out,
“If you release this man, you are not Caesar’s friend;
every one who makes himself a king sets himself against Caesar.”
When Pilate heard these words, he brought Jesus out
and sat down on the judgment seat
at a place called The Pavement, and in Hebrew, Gab’ · ba· tha .
Now it was the day of Preparation of the Passover;
it was about the sixth hour.
He said to the religious authorities, “Behold your King!”
They cried out, “Away with him, away with him, crucify him!”
Pilate said to them, “Shall I crucify your King?”
The chief priests answered, “We have no king but Caesar.”
They handed him over to them to be crucified.

So they took Jesus, and he went out, bearing his own cross,
to the place called the place of a skull,
which is called in Hebrew, Gol’ ·go·tha .
There they crucified him,
and with him two others, one on either side, and Jesus between them.
Pilate also wrote a title and put it on the cross;
it read, “Jesus of Nazareth, the King of the Jews.”
Many of the Judeans read this title,
for the place where Jesus was crucified was near the city;
and it was written in Hebrew, in Latin, and in Greek.
The Jewish chief priests then said to Pilate,
“Do not write, ‘The King of the Jews,’
but, ‘This man said, I am King of the Jews.'”
Pilate answered, “What I have written I have written.”

They gamble for his clothes

When the soldiers had crucified Jesus
they took his garments and made four parts, one for each soldier;
also his tunic.
But the tunic was without seam, woven from top to bottom;
so they said to one another,
“Let us not tear it, but cast lots for it to see whose it shall be.”
This was to fulfill the scripture,
“They parted my garments among them,
and for my clothing they cast lots.”

Those at the cross

After this Jesus, knowing that all was now finished,
said (to fulfill the scripture), “I thirst.”
A bowl full of vinegar stood there;
so they put a sponge full of the vinegar on hyssop
and held it to his mouth.
When Jesus had received the vinegar, he said, “It is finished”;
and he bowed his head and gave up his spirit.

Since it was the day of Preparation,
in order to prevent the bodies from remaining on the cross
on the sabbath (for that sabbath was a high day),
the religious authorities asked Pilate that their legs might be broken,
and that they might be taken away.
So the soldiers came and broke the legs of the first,
and of the other who had been crucified with him;
but when they came to Jesus and saw that he was already dead,
they did not break his legs.
But one of the soldiers pierced his side with a spear,
and at once there came out blood and water.
He who saw it has borne witness—his testimony is true,
and he knows that he tells the truth—that you also may believe.
For these things took place that the scripture might be fulfilled,
“Not a bone of him shall be broken.”
And again another scripture says,
“They shall look on him whom they have pierced.”

The Christ candle is taken away or extinguished. A loud noise is made by a cymbal or other means. The last section is read in darkness.

The burial of Jesus

After this Joseph of Arimathea, who was a disciple of Jesus,
but secretly, for fear of the religious authorities,
asked Pilate that he might take away the body of Jesus,
and Pilate gave him leave.
So he came and took away his body.
Nicodemus also, who had at first come to him by night,
came bringing a mixture of myrrh and aloes,
about a hundred pounds’ weight.
They took the body of Jesus, and bound it in linen cloths with the spices,
as is the burial custom of the Jews.
Now in the place where he was crucified there was a garden,
and in the garden a new tomb where no one had ever been laid.
So because of the Jewish day of Preparation,
as the tomb was close at hand,
they laid Jesus there.

Silence. The room remains darkened with only illumination necessary for safety. The room now remains barren until the Easter Vigil. Everyone leaves in silence, no benediction is said.